Packed up camp in Port-en-Bessin and travelled the few kilometres to Longues-sur-Mer, where there is a very well-preserved German battery of four massive guns, that were part of Hitler's Atlantic Wall sea defences.  Despite 1000 tons of aerial bombs the night of 5th June 1944, they were still active on the morning of D-Day - until some crack shots from the British and French disabled them.  Despite being armed with guide books it is impossible to envisage 135,000 troops and 20,000 vehicles storming the beaches .... an extraordinary feat.  Today was possibly similar to then - blue sky and a very calm sea, excellent visibility.  The land is agricultural with wheat and corn and a  good scattering of poppies which look almost unreal given the location and association.  It all looks unbelievably peaceful, many of the houses seemingly holiday homes and others, beautiful old villas, possibly lived in, but with closed shutters and unkempt gardens as if abandoned .... suddenly not so difficult to imagine 60+ years ago.

My mother's father landed here on D-Day and I must find out which beach - it would have been Gold, Juno or Sword.  He was a doctor in the RAMC, I think attached to the Royal Artillery as his father was before him.  A few years ago the BBC invited people to post memories of World War II to its website.  I wrote what I could remember of Granfa's stories and it is still online here.  I expected to find the whole thing a bit more emotional but perhaps not knowing precisely where he landed made a difference.  Did have a slight wobble when saw an old chap that from a distance looked quite like Granfa .... he walked with a cane and was trying to negotiate some barbed wire at the back of one of the bunkers so I asked if he was trying to do it again and if so did he need any help .... he politely declined but I wish I had asked him more questions but wasn't exactly sure if he was of an age that he would have been here in 1944!

We are now in the Municipal Campsite in Bayeux and have had a quick explore with a plan to visit the Cathedral and the Tapestry tomorrow.  Jess remembers a lot from school about it - will perhaps have to pay her Euros 5 for a guided tour!  The Municipal Campsite is very clean and well-laid out, lots of Brits but that's not the major downside .... our pitch is on the perimeter and seemingly what the mobile youth of Bayeux like to do most is doughnuts in the car park of the Carre Four opposite ..... yay!


The girls are keeping more traditional journals - writing in them every day and so far they are keeping up to date with copious text and illustrations.  I hope they keep going with them .... I have several notebooks from holidays that start with similar enthusiasm but all without exception finish after about three days! 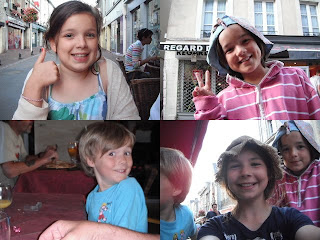